In the Good Old Days™ – 5 or 6 years ago – the powerplay didn’t seem to matter much in women’s T20 cricket. When 120 was often a match-winning score, players brought up in a 50-over mindset eschewed the risks of going “over the top”, and looked instead to accumulate.

It would be easy to look at the scorecard from yesterday’s Stars v Thunder match-up at Guildford and think how everything has changed. Lizelle Lee opened the innings for the Stars, who were chasing a no-longer-par 120, and smashed 66 off 45 balls – surely an example of putting the “power” into powerplay?

Except… that’s not quite what happened.

It was actually the post-powerplay overs that were the difference between the two sides, as the (smoothed average) run rate chart shows. 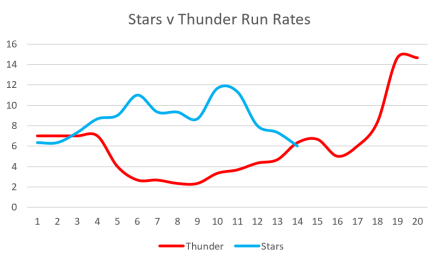 Batting first, the Thunder didn’t have a great powerplay – Marizanne Kapp was exceptional, a she always is, going at just 3.5 runs per over, bowling all 4 overs up-top – but when the Stars came to reply, the Thunder were actually ahead for the first 4 overs; and it wasn’t until the “boring” middle overs that Lee and the Stars really took off.

In contrast, the Thunder had totally slumped in the middle overs – they really were “boring”, with the boundary barely troubled.

Harmanpreet Kaur was at the crease that whole time, and though she eventually got going in a final assault which brought 44 runs off the last 4 overs, prior to that she’d been batting at well under 100 – at the end of the 17th she was on just 25 off 36 balls.

Ellyse Perry’s T20 innings used to follow a similar pattern – she’d often be 10 off 20 balls; 15 off 30 – but then accelerate to finish 60 off 40. On the final scorecard, it looked respectable; but there were a lot of wasted deliveries along the way, and she obviously realised it was a problem, because she worked hard to change it, and she now typically goes at a strike rate of over 100 from the off.

Talking to Thunder captain Kate Cross after the game, she said: “Harmanpreet batted superbly and gave us an opportunity – when she flipped that switch and decided to go, she proved what you can do on a pitch like that.”

And there’s no arguing with that, but… yes… there’s a but!

As the senior player – the big overseas star – was it perhaps her responsibility to flip that switch a lot earlier? To make the most of those middle overs, instead of wasting them?

Having an “opportunity” is better than not having one; but that middle over slump left the Thunder relying on an “opportunity” when they could have used that period to take command, with plenty of batting still to come, right down to Eve Jones coming in at 9.

Those middle overs are where the Thunder could have won that game.

Instead, it was were they lost it.