Guest writer Aparna M tells of her experiences setting up a cricket academy in Toronto.

Cold, dark, long winters. Staying indoors for almost 7 to 8 months a year. Hardly an ideal setting for the game of cricket. But at the other end of spectrum you have a large, South Asian community. Mostly new immigrants. Trying to find a footing in a new country, environment and culture.

Throw economic hardships into the mix, and what do you get? Young families with children trying to find space to play sport, to stay engaged in some physical activity, where they do not have to spend a fortune. Organized sport is largely out of question for children of new immigrants struggling to make ends meet. In this setting was established a multisport academy which began its operations with cricket only, keeping in mind the largely South Asian population in the neighborhood in Toronto.

The first year of operation saw limited numbers both for boys and girls (there was just one girl). She too dropped out after a couple of weeks. The reason given by her father was that they tried to work out the timings but without success. This could have been discouraging both for the organizers as well as for other potential girl participants. However, the efforts to bring in girls to the program did not stop.

And these efforts did not go to waste. The second year of the academy saw more girls coming along. About six of them. No, it was not a lot. But it was the beginning. Most of them tagged along with their brothers. But that was okay. What mattered was that they were enjoying their time at cricket. That they wanted to learn the sport. They wanted to learn how to hold the bat, how to move their feet, how to bowl without bending their elbow and of course, they wanted to master the art of fielding, both catching and throwing. 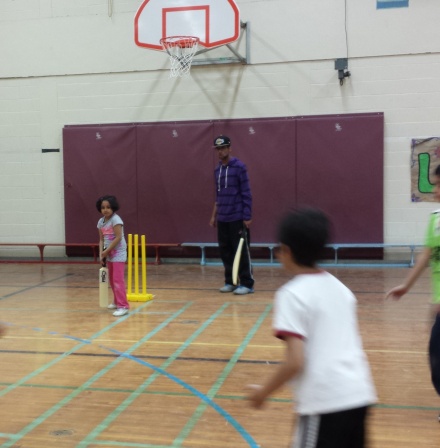 It was heartening to see these little girls all excited, and being part of the games after the practice session. They were developing game awareness. You could see it in their running between the wickets. Calling for a run. Or responding to their partner’s call. Throughout the summer, they would show up every day for five days a week, for seven weeks. And their numbers too went up.

Once summer was over, and the school year started, the program shifted to once a week in the evenings. Some from the summer dropped out, but other girls joined in. While almost all of them were still tagging along with their brothers, there were a few who were coming there on their own. Because they were enjoying the new sport. They were enjoying playing cricket!

It was heartwarming to see girls enjoying the sport at such an early age. It was important to keep the environment fun, with the aim for them to develop a liking for the game – hopefully a lifelong one. While of course it is too early to say whether they would ever be able to take up the sport professionally while they are in Canada, it certainly would do no harm if they could continue their association with the sport by playing it regularly.

The program saw success in the younger age group of 5-10 year olds, but it was difficult to attract the slightly older girls in the program. Separate sessions were set up for the 12-and-up age group after initial interest was shown by some of the older girls. However, once the schedule was set the response was extremely poor.

The reason was the pressure of studies. Of assignments and exams. Of coping with domestic chores. There was the peer influence aspect as well. The girls wanted to be part of the program as a group, but once a couple of them dropped out, the group’s participation fell apart. This for sure was a setback, but hopefully things could still be turned around in future. For example, some programs could be offered during school time, or even as part of after-school programs.

However, the participation of the younger girls is a definite positive. Hopefully by the time they are 12-13 they will have a few years of cricket under their belts, and will have developed a love for the game and a desire to continue playing it, even at recreational level. With women’s T20 leagues being set up across the globe, there might even be the chance to take up the sport professionally, if these girls continue to seriously develop their skills.