On a difficult batting pitch, it was Berkshire’s bowling unit that shone as they bowled Nottinghamshire out for 145 to achieve their first win of the season, triumphing by 37 runs. 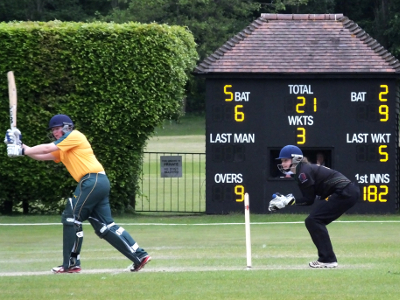 With Berkshire defending 182, opener Daisy Gardner, bowling with pace and movement, looked fired up from the outset, removing Notts opener Zoe Richards with only the fourth ball of their innings, LBW for a duck.

Then in Gardner’s next over, Danni Wyatt was run out. Looking to take a sharp single, backing up off an LBW appeal, she was sent back but slipped. Berkshire celebrated the wicket, but it soon became apparent that Wyatt was in some pain with her shoulder, and it was several minutes before she was able to walk off; with hospital scans later showing a dislocated shoulder and a minor muscle tear but no serious damage. 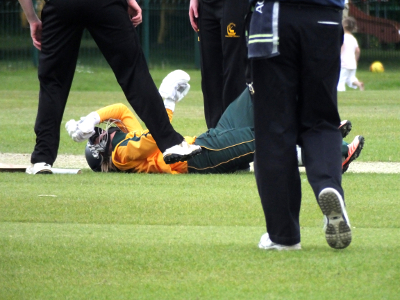 It then went from bad to worse for Notts, as Sonia Odedra was adjudged to have edged Heather Knight behind for the Outlaws’ second duck, leaving them 5/3. Notts’ veteran ex-England glove-butler Jane Smit provided some fight-back in the early part of the innings, before being brilliantly caught by Heather Knight, running backwards at mid off from the bowling of Fi Morris. It was then Jenny Gunn who took up the resistance, with a cool and collected 52*, but the drip-drip-drip of wickets continued, and Gunn eventually ran out of partners as Berkshire celebrated victory in the 47th over.

Earlier, Berkshire had won the toss and elected to bat on what captain Knight described as looking like a “belter of a pitch”. However, appearances were deceptive and runs proved difficult to come by against a quality Notts attack. Opening the bowling, Sonia Odedra looked every bit an international-class bowler; while Danni Wyatt sent down 10 metronomic overs, returning an excelent 2/17.

Knight played well, taking most of the runs from an opening stand of 56 with Alex Rogers, before being comprehensively bowled, playing down the District Line to Jenny Gunn. All eyes were then looking out for Aussie superstar Alex Blackwell, but she opted to come in at her usual position of 3-down, pairing conservative stroke-play with some assertive running to keep the scoreboard ticking, if not tocking, at around 3 runs per over.

By the 40-over mark, Berkshire were 130/6. They were able to accelerate a bit in the last 10 overs, but finishing on 182, they still fell some way short of the 200 needed for maximum batting bonus points, perhaps showing the unfairness of that system in these kind of circumstances.

However, it proved to be enough for the win and by bowling Notts out, maximum bowling bonus points were achieved*.

“There were 500 runs scored on this pitch yesterday but it was pretty slow today! Our plan was to try and bowl really straight and our bowlers executed it brilliantly.”

Berkshire will be hoping for a repeat performance in today’s match against Yorkshire, also at Finchampstead.