The Appleton Tigers are part of Appleton CC, who play their home games at their Lyons Lane ground in the village of Appleton, in the south of Warrington, Cheshire. Appleton have promoted women’s cricket ever since 1996, when – as part of the Lottery Sports Fund application to purchase the ground – the club’s development strategy included increased participation and opportunities for girls to play cricket. By 1999 there were enough players for Colin Smethurst to start a junior girls’ team.

Over the next four years the number of players and the standard of cricket continued to rise and the team played friendlies against Appleton boys, private schools and other local clubs who were trying to start girls’ sections. By 2002, four of the team were playing league cricket for Brooklands and Birkenhead Park, alongside their friendly matches with Appleton CC. Colin decided that the time was right to give the squad a new challenge by joining the Cheshire Women’s Cricket League in 2003.

Sue Barlow subsequently took over managing the team and worked tirelessly for over ten years to make Appleton into one of the most successful and best integrated women’s sections in the county. Sue is also the oldest player to have represented the club, aged 67 at her most recent appearance in which she scored a career best 11 runs. Several players have made their women’s debuts at the age of 12, including Natalie Lyons, Jen Regan and current rising star Georgia Heath. They are currently coached by Jess Lewis, who is also the Women and Girls Development Coaching Officer at the Cheshire Cricket Board.

Appleton play in Division 1 of the Cheshire Women’s Cricket League and have won it 4 times in the past 7 years. After joining the league as a very young team in 2003, Appleton developed into a force to be reckoned with, winning their first trophy in the form of the T20 Plate in 2008. The 2010 season was the best in Appleton’s history as they won Division 1 for the first time as part of a league and cup treble. Their achievements was recognised when the Tigers picked up the Warrington Guardian Sports Personality Team of the Year award and Sue Barlow was honoured as Unsung Hero of 2010. 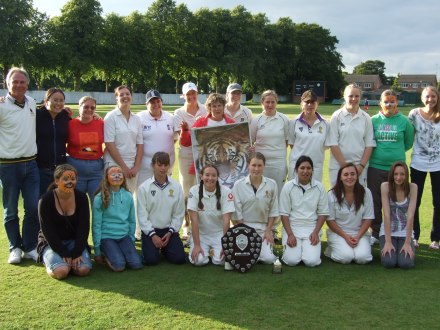 Girls as young as seven years old enjoy training at Appleton, who compete at under 11, under 13 and under 15 age groups in both the Cheshire Junior Girls League and as part of mixed teams in the North Cheshire Junior Cricket League Cheshire County Cricket League. The thriving girls’ section has been a key factor in Appleton’s success by providing a series of key players to the senior side.

The club’s success has been built on the backing they have received from those on the club committee at Appleton CC, especially Al Rogers, Ant Hurst and Dave Hurst. When the girls’ team started they had a small pavilion with very basic facilities, until in 2006 the club built a modern new pavilion with the help of member loans and grants. Since the arrival of the Cheshire T20 Cup competitions in 2008, the team have gone by the name Appleton Tigers and been roared to success by an array of soft toy tigers and face painted supporters.

For more information about the club you can contact current captain Nathalie Long by email at appletoncricket@gmail.com or check out the club website, www.appletoncc.org.uk. They describe themselves as “a friendly club welcoming anyone who wants to give cricket a go, from total beginners through to county standard players.”