Catford Wanderers was originally formed as the women’s section of Blackheath Cricket Club in 2004, but moved across to join the Catford Wanderers club in 2012. The move came about because of Catford’s frustration at the lack of matches which they got to play on Blackheath’s main ground. Current club member Sarah Berman recalls that “in 2010 we played every home game on a different field which got quite frustrating”. In 2011 Blackheath struck a deal with Catford Wanderers for the women to play all their home games there and “after seeing the level of interest, support and commitment to us amongst the guys there, we decided to move to Catford permanently.” 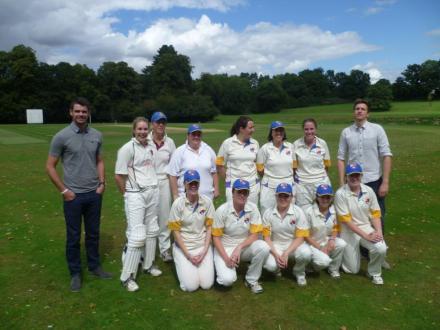 They now play at Catford Wanderers Sports Club, which has good facilities: a really good square, a clubhouse with a cheap bar, and decent nets. A couple of years ago the club invested in new covers, which Sarah says has made a massive difference. They play in the Women’s Cricket Southern League, and last season won the 40-over part of their division. This season they are moving to a new, tougher division and are hoping to hold their own.

Former Kent captain Evette “Swoop” Burton is one of their star players, and Catford is also the former home club of ECB Women’s Media Manager Beth Barrett-Wild (formerly of Essex), who opened the batting for them in the 2013 and 2014 seasons. They are working on increasing their junior representation, and the club’s junior chairman does a lot of work with local schools with the aim of bringing more boys and girls through into the sport.

One thing that becomes obvious, talking to Sarah, is that the club love their nicknames! Current captain, Kiwi Greer Hill, is known as Judderbar (the word that New Zealanders use for speed bump). Sarah herself is known as Gibraltar, or “Gib” for short, due – in her own words – to her “rock-like batting”!

They are also a tight-knit bunch, and often meet up to watch cricket together and for socials out of season. As Sarah puts it, “friendship and enjoyment (on and off the pitch) is the core thing about the team.”

Happy club memories include their Holland tour in 2009, in which “any time that wasn’t spent on the pitch was spent in a bar”, and the time in 2013 against Bishop’s Stortford when Jimmy Anderson turned up to open their new pavilion and ended up as a spectator! Cricketing-wise, the highlight to date was bowling out Stoke d’Abernon for 81 back in 2009, thus beating a team stacked with Surrey U17s including a certain Nat Sciver.

Shout-outs are due to scorer Chris – the mum of team stalwart Jemma – and the team mascot Cricket Sheep (who you can follow on twitter @cricketsheep!), as well as the team’s admin queen and umpire Yvann.

Sarah says that new players of all standards are very very welcome. Contact Yvann by email here or on 07890 269959 to find out more. The club also have a facebook page which you can visit at: