Berkshire have appointed a new coaching team for 2016, led by ex England Test batsman Aftab Habib, assisted by two former Berkshire players: Emma Boswell and Hannah Burr. CRICKETher met up with them this week to find out more…

New Head Coach Aftab Habib played two Tests for England in 1999; and after a successful county cricket career which included a Championship title with Leicestershire and two 1,000-run seasons, he made the move into coaching. He has previously run Women’s & Girls’ development in Buckinghamshire, and more recently coached the Hong Kong national side.

Assistant Coach Emma Boswell meanwhile is recently retired from the Royal Navy, having spent much of the past few years beneath the waves in a nuclear submarine; but still finding time to skipper the Navy’s women’s cricket team. She and fellow Assistant Coach Hannah Burr played together at Berkshire in the late 90s and early 00s, and will now team up again, working with both the 1st XI and the age-group squads. 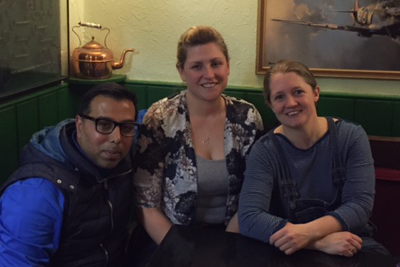 Berkshire’s senior squad is likely to have a familiar look to it this season. Though sadly Aussie overseas Crinny Hall won’t be returning, the core of the team which came 4th in last years Women’s County Championship are expected to be reunited for the 2016 campaign.

Beyond the immediate present, Berkshire are looking to build a more sustainable foundation for the women’s game in the county, hoping to emulate some of the success which Sussex have had in this regard under the leadership of Charlotte Burton.

One target is to broaden the base of the women’s game, to the point where there is a genuinely competitive “selection” process for the squads at both senior and age-ground level. This will partly be achieved by strengthening links between the county and the clubs in the area which run girls’ sections.

Another objective is to create the next generation of female coaches for the women’s game, by encouraging all the players in the age-group squads to begin the process of earning their badges by working with the age-groups below them, with the hopes that the next cohort of players graduating from the U19s will have already have achieved their Level 1 and be well on their way to Level 2.

Of course, Berkshire don’t have the luxuries available to some of their rivals with First Class men’s county facilities behind them; but you only have to look at the fate of relegated Nottinghamshire and Lancashire last season to see that sometimes that’s not everything – something that Berkshire’s new team are determined to prove once again in 2016.