The South Africans have just been punished for over 450 runs in a day, as first New Zealand and then England broke the record T20 totals, but Laura Wolvaardt has bigger things on her mind as we meet her on a sunny day in Taunton.

“By the end of the year I have to decide whether I’m going to start with a medicine degree or continue with cricket,” she says.

The South African opener made her debut in February 2016 against England, having been catapulted into the national side aged just 16. “It did happen a bit quickly,” she tells us. “I went to 1 or 2 national camps and then I went on my first tour.” Asked whether she missed out on a “normal” teenage life she says: “I was never the major party type in high school. I like my life how it is now. My friends are my teammates.”

Since that debut Wolvaardt has already made waves on the international scene. Against Ireland in July 2016 she became the youngest ever centurion for South Africa, male or female – we were there to see her maiden international century – and she hit a half-century for her side in last summer’s World Cup semi-final, a match South Africa ultimately lost to England.

Reflecting on that game Wolvaardt describes the memory as “bittersweet. We got so close and you think about all the what could have beens. We could have played that final and played at Lords and who knows what could have happened then? But I try to move forwards and not dwell on that too much.” 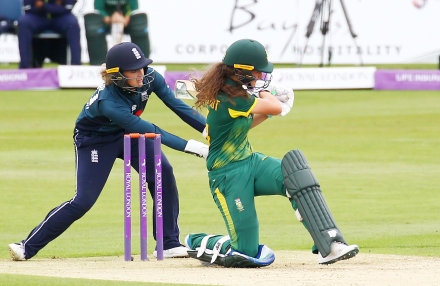 More recently she enjoyed a stint playing for Brisbane Heat in the WBBL, which she describes as an “amazing experience. We were treated just like the men’s sides and there were crowds at the games.”

“It was the first time I left home by myself for longer than a few weeks. It was weird playing in a new environment at first but I made friends there quite quickly. The people were super-friendly and my team mates were great so I fitted right in. It wasn’t as difficult as I expected.”

It was all part of her ambition to develop her T20 game. Wolvaardt is a natural in the longer formats – oh that South Africa might yet play another women’s Test – but her style is less suited to the mile-a-minute pace of Twenty20. What exactly has she been working on? “It’s all about more options -getting more shots into my game, and getting that strike rate up.”

And yet it might all be in vain as the biggest decision of her life awaits.

The 19 year old finished school last year but agreed with Stellenbosch University that she could interrupt her studies for 12 months before commencing her medical degree. However, Wolvaardt says that it will probably not be possible to continue holding the place beyond one year.

So what are her options?

“I could decline the medicine and play cricket for a few years, but if I want to study medicine I’d have to reapply, and it’s always a bit of a risk because it’s very difficult to get in back home, so once it’s there you don’t really want to give your spot away.”

“I could study a BSc in Medical Sciences or something while I’m playing cricket, to keep me busy.”

“Or I start medicine next year and I try to juggle the cricket. I don’t think we have that many tours next year so maybe it could work out, and then I could try and postpone again. But I don’t know if they’d let me.”

“I don’t think there’s a way that I can do the full 6 years of medicine right now and play full-on cricket as well. Second year medicine is pretty hectic.”

“Medicine has always been the dream. And I have to think about after cricket, because if I study something else than that’s what I’m going to do when I’m 30.”

The dilemma is enhanced by the fact that, compared with countries like England and Australia, earnings through cricket are still lagging behind. The new MOU currently being negotiated by Cricket South Africa is intended to go some way to closing this gap but as yet the outcome remains unclear.

For the CSA administrators they need look no further than Laura Wolvaardt to understand what is really at stake in those negotiations. Because what seems clear is that, even in this era of increased professionalisation, our sport is at risk of losing some of its brightest stars. There is no better or more powerful argument for equitable pay.

3 thoughts on “INTERVIEW: Laura Wolvaardt On The Ultimate Dilemma – Medicine Or Cricket?”